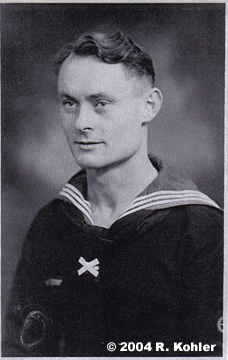 Erich Toelke was born on October 6th, 1910 in Bremen. His parents were Hermann and Lina, nee Klaholz. Father Hermann's birthdate was September 19th, 1872 and he was a plumber by trade. He came from an old established family business in Bremen. The Toelke family had several more children. There were the sons Hermann and Alfred and also the daughters Erni-Lina and Friedhilde. Erich was the youngest of the siblings.
He attended and graduated from the "Hauptschule", the mandatory school system; he did not belong to the Hitler Youth. By nature he was very quiet, dilligent and honest. In his spare time he enjoyed reading and drawing.

Just as his brothers before him, he too became a plumber. Due to the fact that the sons originated from an old and established business, they were excempt from the military draft.Even though, Erich volunteered for the Kriegsmarine. He was 1.78 Meters tall with a slender built, had dark hair and blue eyes. On July 3rd, 1936 he married Henny Gerhard. Her birthdate was January 8th, 1913.Three years later on October 26th, 1939, daughter Erika was born followed by son Erich, who was born on August 17th, 1944.

The date and year when Erich Toelke volunteered and joined the Kriegsmarine is unknown. The question arises if U-869 was the only U-boat on which Erich Toelke served. He was thirty four years old and the oldest crew member of U-869.

The above stated information was kindly submitted to me by Erich Toelke's son, Erich.