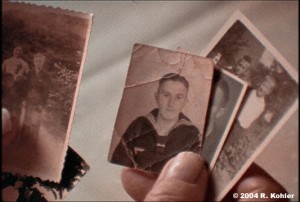 The following information is an excerpt from a 1998 interview between Willi Rothsprak's younger brother Johann Rothsprak, and Spiegel TV producer Michael Kloft. I have been unsuccessful in contacting Johann Rothsprak for any further information about his brother Willi.

Willi Rothsprak was born on January 21st, 1926. He was a quiet and well balanced young man who had the urge to do something different. He had been trained as a lathe operator but the opportunities in that field were not as good as he thought. He also felt this occupation did not suit him so he joined the Navy and volunteered for the U-boats. He was accepted into the submarine force and with his background as a lathe operator was assigned training as a machinist. When the war began he felt that this was a great adventure.

After completing his training Willi was assigned to a front line U-boat. Just before the boat was to leave on war patrol, Willi injured his foot. The Captain of the boat told Willi "you can't go like that, we need healthy people. You must go to the sick bay". The U-boat left without him and he later heard that the submarine had been sunk.

He was then assigned to the U-869 which was under construction in Bremen. He worked on the boat through commissioning and training. When the U-869 was at the Ag-Weser shipyard in Bremen, Willi was visited there by his younger brother Johann. Although he was only 15 years old Johann worked at the Deschimag shipyard in Bremen building both destroyers and U-boats. Johann was very proud of his older brother. As he tells it, "to be a U-boat crewman was really something special. The submarine force was the be all and end all. Even the uniform was fascinating. Army uniforms were all grey but the navy uniforms stood for something. Women were intrigued by it. All the bad stuff that came with it, you didn't see back then". That would be the last time Johann saw Willi.

Johann was soon drafted into the army and sent to fight in France. Captured and sent to an American prisoner of war camp, he survived the war and was released from captivity in 1966. One other brother, (name unknown) was killed in Russia.