Nearly twenty-six years after Bill Nagel first discovered the unknown German U-boat  I am still learning about her lost crew. Recently I was  contacted by a collector of WW2 Militaria who had come upon a death notice of a German sailor listed as lost on the U-869 during the last days of the war. This "death card" (as they are known), for 'Heinrich Verhülsdonk" has his picture and states he was lost on U-869 off the coast of North Africa. Thanks to the efforts of  our dive team, the true fate and location of U-869 is now known to be off the New Jersey coast.

Robert Pieciak went to my web site and compared the Death Card picture to the crews commissioning photograph and was able to clearly identify one more of the sailors of U-869 and sent me the following information so I could update the website.

Hi Richie, my name is Robert (I live in NYC) and I collecting militaria stuff from WW2. Last year ago I was buy from one e-stand death card from u-boot name on this card is: Heinrich Verhülsdonk when I was check it was belong to one member of crew U-869. On your website with picture of the crew U-869 it will be on "unknown soldiers" picture nr.23 (unititled-23).

I attached scan of his death card, on the top left corner picture from  your website. Please look on his Kriegsmarine  "Donald Duck Hat" he was put exactly this same like on the small photo in the left corner. 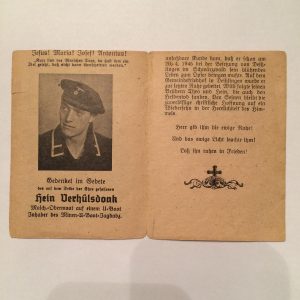 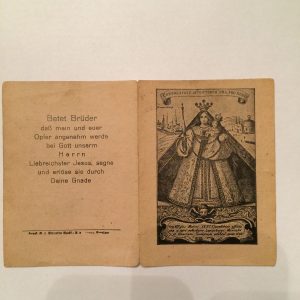