I was born on April 6th, 1921 in Bochum, the now called Nordrhein-Westfalen. I came into this world as the family's thirteenth child. My father was a tailor by profession and moved from East Prussia to the Ruhrgebiet (Ruhr valley).

Since the loss of World War I, life was very hard for the family. There was never enough to eat. My father fought in World War I at the Western Front and was wounded in the battle of VERDUN.

I got to know the fateful Nazi time in its entirety quite well. I was twelve years old when Hitler took over power and was councously aware of the terror against those who had different views and thoughts and knew of the kidnapping of Jews from of their homes. To inquire or even speak about these incidents was prohibited.

My parents were faithful Christians and belonged to a sect called "Bible researchers" also known as "Jehova's Witnesses". Because of this affiliation they were politically persecuted. I became an apprentice as a "Stahlbauschlosser", steel construction mechanic and graduated from the "Fachschule" , trade school, in Dortmund. I was now a "Stahlbautechniker", "steel construction technician/specialist".

In July of 1940 I was drafted to the "10th Schiffstammabteilung" in Wesermunde-Lehe, which is now called Bremerhaven. While going through the mustering process I decided to volunteer for the Marine and the U-Boot-Waffe. My "Stammrollennummer" (military ID number) was: UN 8069/40T. This translates to:

U-Boat-North Sea, Technician, year of birth 1940. This information along with the "Feldpostnummer" or Battle field mail number M 47187 was also engraved on the ID tag (dog tag) which had to be worn at all times (for proper identification in case of death).

After the Basic Training which took place in WESERMUENDE I was transferred to the "Marine Nachrichtenschule", radio man training school in Aurich/ Ostfriesland. After graduation I was officially considered a "Funker", radioman and was to transfer for the first time to a ship. My orders were for the mothership NEISSE in Danzig. We accompanied the U-boats every day into the Ostsee and were also designated target vessel for the U-boats in training. This took place day and night. The boats attacked below the surface at night and fired unarmed practice torpedoes. The torpedo head was illuminated and we were able to follow their path from aboard the NEISSE. The so-called "Fangboote", "retrieval boats" recovered the torpedoes with nets. 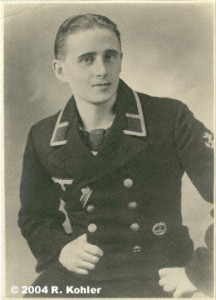 It was December 1941 when I received order to attend the "Baubelehrung", construction orientation in Hamburg at the shipyard of Blohm & Voss. This orientation was for U 602, which was to be commissioned the same month. My commander was Kplt. Schueler, who had been very successful previously with U 141 in the Sea around Ireland. Schueler was a good and humane commander. 1942 started with testing and familiarizing of the AGRU-Front. Now it was our turn to fire on the NEISSE and other target vessels. We were introduced and experienced our first practice depth charges. Expectations and demands from everyone, officers, commander, and crew very high.
After completion of the AGRU-Front training we sailed back to Blohm & Voss in Hamburg where more work was to be done to the boat. We lived at "VEENDAM". Once the work was completed we sailed back through the EAST-WEST canal to Kiel, destination 5th U-Boat-Flotilla where the boat was readied for its first war patrol.

Via KIEL-BERGEN-DRONDHEIM into the Atlantic Ocean. Plenty of opportunities to engage but too many airplanes forced us to dive. After seven weeks of hard combat with airplanes, destroyers, and adverse weather conditions, we entered the port of LORIENT in France.

Through the Gulf of Biscay towards the South. Kplt. Schueler informs us that we were to break through Gibraltar into the Mediterranean Sea. Of the two possibilities presented, Kplt. Schueler decides to attack at night and above the surface. Breakthrough was a success; evaded airplane attacks by diving fast.
New operation plan had us heading towards Northern Africa. At CAP TENE, between Oran and Algiers we sink the British destroyer PORCUPINE.

Entering the port of TOULON 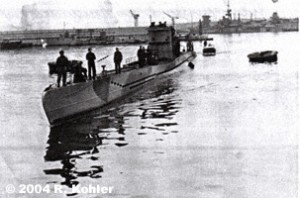 Before the boat departs I receive orders to report to the "Nachrichtenschule", radio school in Flensburg-Muerwik.
After graduation my orders were to report to "Baubelehrung", "construction orientation" for U 869 in Bremen at the DESCHIMAG shipyard. Commander was Kplt. Helmut Neuerburg. After commissioning we sailed through the EAST-WEST canal for testing at AGRU-Front. I participated in all training exercises on U 869 until departure for her first war patrol. Additional work on the boat was done in Stettin at the VULCAL shipyard and not at the DESCHIMAG in Bremen. A few days before departure I fainted in port and was taken to Stettin and hospitalized. I suffered from double sided pneumonia and pleurisy. The boat departed on her first war patrol without me and did not return.

My life after the war:

After my return from Russian war imprisonment I married Lotte Guschewski, nee Rau, with whom I am still living together.
I learned the trade of "Maschinenstricker" knitting machine operator and achieved the title of a master. In 1978 I was elected to the Memmingen City Council and retired as a city council member after twenty-four years in February 2002. I am a founding member of LEBENSHILFE, an organization that gives aid to handicapped children.
I am honorary member of the EUROPA-UNION, "European Union" Memmingen. I am the head of TERRE DES HOMMES in Memmingen and traveled with onehundred handicapped individuals to Damascus in Syria. At this time I met the politician Mr. Yassir Arafat. Today I am managing a "Sozialstation", an "outpatient nursing office" with forty nurses who take care of sick and elderly individuals in their homes in the city of Memmingen. For my social engagements I received the "Bundeskranz der Bundesrepublik Deutschland am Bande", bestowed on me by the German President Herzog. The town of Memmingen awarded me the TOWN SEAL. I have three grown children and two grandchildren.