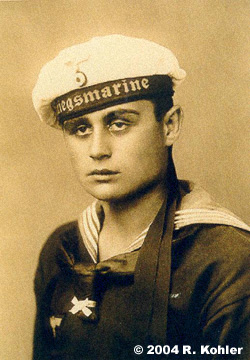 Otto Brizius was born on February 25th, 1926, the second son of Karl and Elisabeth Brizius. His older brother Kurt was born two years earlier on July 28th, 1924. Their father Karl was born on February 7th, 1901 in Bisterschied; he was a stone mason by trade and his wife Elisabeth was born on February 20th 1900 in Doernbach. She was tall, had dark hair, a great sense of humor, and was strong willed. They lived in a small village in the Nordpfalz, called Doernbach in a two story house with a garden and a small Linden tree in front. On one side was a small stable in which they kept cows, several pigs, goats, and chickens. In the back of the house was a larger barn with a small area to the right, which served as a tool shed. The village's two major roads passed on both sides forming a triangle of the property. The surrounding area consisted of farmland and thick woods with a small stream that ran close to the barn.

In the years before the war things were very difficult and work was hard to come by so Karl left on his bicycle every Monday, to ride to the closest train station to catch a train to the Saargebiet. He he worked there of different projects as a stone mason and would return home late Friday night. Elisabeth took care of the animals, vegetable gardens, and fields. After her mother's death she took care of her father Jakob Denzer who moved in with the family and had his own room upstairs. Elisabeth had kidney problems. During times when she was too sick to tend to her daily duties, Kurt and Otto helped their grandfather to take care of the animals and the daily chores. The villagers were surprised how they mastered this difficult home situation at such a young age. Both boys attended the village school a few houses down the road. Otto and Kurt belonged to the village's Hitler Youth Group. Their father realized the necessity for them to participate since it would ensure both the chances to attend secondary private schools or an apprenticeship with the government later on.

After school they had to complete their schoolwork and then tend to their chores. Otto was often times in charge of taking the goats to the field outside the village. In late summer/early fall both Otto and Kurt helped with the fruit harvest and made hay for the animals. They also helped Grandfather Jakob make pear wine. After Kurt and Otto finished elementary school they attended a secondary school in Winnweiler. This school was not mandatory and therefore required tuition and longer travel. Both boys were given bicycles to ride to the train station and then took the train the rest of the way to Winnweiler, about 10 Kilometers. Otto taught himself to do stunts with his bicycle, riding backwards, and standing on it, anything that would prove to be a challenge.

They each had very good grades and took an interest in drawing and both completed their secondary education. Otto then decided to attend the Meisterschule in Kaiserslautern, 30 Kilometers from home. This school was geared towards a trade and the construction and building of steel and iron. His studies entailed calculations, drawing and reading blueprints. He had a very creative mind and his final piece (his Meisterstueck) was a wrought iron candleholder. He was very proud of this accomplishment.

Otto and Kurt had opposite personalities.
Kurt, the older one was quiet, enjoyed reading and drawing, a charming young man, the girls loved him. He loved sweets and always had chocolate for the girls. He was tall and had thick dark hair; he was serious and elegant due to his work in the office.
Kurt entered a contract for an apprenticeship as a tax collector for the IRS on April 21st, 1940. The contract ran until September 30th, 1942. He was to complete a three-month trial period, which was included in the agreement. The contract also required proof of an above average report card and membership to the Hitler Youth. One of his job duties was to drive from village to village to collect tax moneys. His father bought him a motorcycle, a DKW NZ 250 Sport to provide him with transportation. Kurt loved his motorcycle and his job and at that time a new motorcycle was something special to have. He would not let his younger brother Otto take it for a spin. When Kurt turned 18, he was drafted into the Wehrmacht. He completed his basic training in France; he came home on leave several times and visited his friends and family always riding his motorcycle. Kurt saw combat in Russia and Italy and took part of the battle at the Monte Cassino

Otto was short with dark blonde hair, good-natured, outgoing, strong willed, spontaneous and loved to laugh out loud and like his brother loved sweets. He was a prankster. One of his favorite subjects was his grandfather. He would bring pear wine from the cellar to his grandfather and on the way drink some of it, to make up for it he would add water. He would also help his grandfather get dressed, hide his slippers or put them on the wrong feet. Otto and his friends, Otto Wolf and Hans Zubiller would climb the trees in the nearby woods, called the "Laemmerwald". Otto was fearless, always trying to get to the top.
Anyone looking for Otto at any time would go either to the stream or to the dam outside the village. He was drawn to the water since he was a little boy. Kurt and Otto had their own circle of friends. They were brothers in the truest form but went their own ways. Both taught themselves how to play the accordion. Otto liked playing for his friends. They would meet at Zubiller's, a local tavern with an adjacent dance hall. The Zubiller family had another smaller room where Otto played for the girls who practiced their dance steps when suddenly he stopped playing. The girls inquired why and he laughed and said, "You're all dancing to my tune aren't you?"

When Otto was 17 years old and close to graduating from trade school he wanted to join the Kriegsmarine as a volunteer and dreamed to be in a one-man sub a "Biber". He was very serious about this and badgered his mother until she finally gave in and asked her husband to please sign Otto's voluntary enlistment. His father tried to talk him out of it but was not successful. He already had one son gone to war and did not want his youngest join as a volunteer. With a heavy heart he signed the papers and Otto was delighted. Since he had volunteered for the Kriegsmarine he was excused from the mandatory "Arbeitsdienst". He started his U-boat training and on one of his visits home he tried to persuade one of his friends, Rudi Denzer to volunteer as well. He visited him several times; he told him to, "Volunteer because we have to win this war". Because of this his friends teased him and asked if he wanted to win the war all by himself. He was very patriotic and believed he could make a difference. Their father Karl Brizius was forced to join the Wehrmacht in 1941. He was forty years old and was sent to the border patrol group stationed in Geisingen in Southern Germany.

During the winter of 1943/44 Kurt was home on leave and went sledding with Otto and their friends. Otto had built a big sled in his father's tool shed. He added metal to the bottom for greater speed and designed and attached a steering wheel. With it he pulled and maneuvered his friends down the hill faster than they could go on their own. The girls were sledding but were not going fast enough. So the guys built a blockade to have the downhill road all to themselves. The girls ganged up and went chasing after Kurt, who hid in a small garden, they found him, dragged him to the well and drenched him with cold well water.

This was the last time both brothers were happily together with their friends and family.

Otto left in December 1944 on U 869 his first and last war patrol. The boat was officially declared missing on February 1945. Otto was only 18 years old.

Kurt also had to return to the front. He suffered injury to his head and died in a Red Cross field hospital on August 2nd 1944. He was buried in Varese, Italy. He was brought home to Doernbach after the war and buried on February 23rd, 1950, during a heavy snowstorm, in the family grave at the cemetery. He was only 20 years old.

Elisabeth Brizius became very ill and died on December 26th, 1951 at the age of 51 years.

Karl Brizius was captured by American Forces, who handed him over to the French Army. He worked for a French farmer in Southern France as a farm hand. He was released from imprisonment late 1946.

He married in June of 1957 for a second time and with his second wife, Gertrude Brizius, nee Groesch he had a daughter Baerbel Luise who was born in 1959. She is also the author of this biography. She lives with her family in the United States, not too far where U 869 was found.