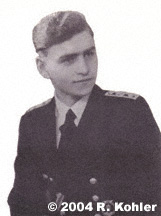 On June 19th 1922, Elise and Otto Brandt celebrated the birth of their first child Siegfried, in the East Prussian town of Zinten Kreis Heiligenbeil, 40 miles south of Koenigsberg. Otto Brandt was working as a railroad official in Zinten and was no stranger to civil service. Years earlier he had lost his leg and suffered a severe chest wound while serving in France during World War One. Two more sons followed: Norbert on March 15th 1924 and Hans-Georg on November 30th 1930. In 1930 the family built their home in Zinten. (Today Zinten is known as Kornevo and Koenigsberg is called Kaliningrad, in what is now Northern Russia). The Brandt's raised their sons to be devout Protestants. As time passed and the boys grew, their faith was challenged by the growing influence of Zinten Nazi Party officials. Walking to church on Sundays, the family was ridiculed and taunted. The Nazis reminded Otto that his sons were required to attend Hitler Youth leadership meetings every Sunday. Otto told his sons that they could go to the mandatory leadership meetings 3 times a month, but on the last Sunday they must go only to church.

By his example the elder Brandt instilled the noblest of ideals and the richness of his faith into his sons. More often than not, this was at direct odds with the Nazi Party and their plans for the youth of Zinten. At a time when many young men flocked to the Nazi ideology, young Siegfried made a pact with his two closest friends to conduct themselves according to the highest Prussian traditions of honor and loyalty. Active in his congregation, Siegfried played the piano and joined the choir and youth circle. Nicknamed "Siggi" by friends, he was known about Zinten as a genuinely good person and constant gentleman who spoke easily with everyone, rich or poor.

Siegfried's formal education consisted of four years in the Zinten Volksschule, six years in the Zinten Mittelschule and three years in Loebenichts`sches Gymnasium in Koenigsberg for humanistic education. Both the elementary and middle school had ties to the Navy, and many of their programs had a maritime emphasis. Siegfried excelled in swimming, winning several medals and certificates. During warm weather he often swam at the forest's edge in Zinten, and was so good he became a rescue swimmer or life guard (Rettungsschwimmer), earning the skull and crossbones emblem on his swim trunks. Upon completion of school in Koenigsberg, he received the coveted Abitur - and with it a scholarship to the technical high school in Danzig, which he chose not to attend. Instead, he spent three months in the Reichsarbeitsdienst in Kuckerneese, after which he volunteered for the Kriegsmarine (Navy). This was not a surprising decision, given his schools Navy affiliations. His father was extremely proud of him, but his mother was concerned about the dangers of war. Everyone in the family knew that with his aptitude and abilities, Siggi was going to be an officer.

On January 7th, 1941 seaman cadet Siegfried Brandt reported for basic training at the 7th Ships Headquarters in Daenholm. For three months, he underwent his basic infantry training and drill instruction. During this period he met Clemens Borkert and they became good friends, and they would share the same duty stations together for the next two years.

After completing the basic training in April Brandt and Borkert were assigned to the 3rd Raeumboot-Flottile for training aboard the escort vessel "Groeben". The ship was based in Boulogne and was conducting mine sweeping operations in the English Channel. The next few months would be filled with many different posts; training in Kiel and Swinemuende with marine artillery; back to escort operations with the "Groeben" in the English Channel in September; then on to primary non-commissioned officers training in Gluecksburg.

At the completion of the N.C.O. (1) training, both men were promoted to the rank of Matrosengefreite (enlisted men), and assigned to the 4th Raeumboot-Flottile in the English Channel. For the next six months they served in minesweeping and escort operations until June 1942, when the minesweeper they were on was sunk and both men had to swim to the safety of a following vessel. Shortly after this they both went back for further N.C.O. (2) training and graduated as Bootsmann's in September of 1942. At graduation, all the newly appointed NCOs were asked to volunteer for the U-boat service, and both Siegfried and Clemens volunteered to join. Both men went to Gotenhafen near Danzig in Poland for training at the helmsmann school. After just three months training, Siegfried was once again promoted to the rank of First Boots Mate and assigned to the U-108, which was operating with the 2nd U boat flottile in Lorient France.

When Siegfried joined her crew on December 12th 1943, the U-108 was a seasoned type IXB U-boat commanded by Korvetten Kapitaen Rolf-Reimar Wolfram and she had already completed nine war patrols and sunk 25 ships. U-108 left Lorient on January 1, 1943 for operations with the Delphin wolf pack northwest of the Canary Islands. On January 10th, a Gibraltar based British Catalina aircraft spotted and attacked the U-108, inflicting heavy damage with four depth charges and forcing her return to base for repairs. Upon U-108's return to France, Siegfried was again promoted, this time to First Cadet. He was sent back to Germany and went to the 1st U-boat School in Pillau for 16 days, and then spent two and a half months in officer training in the Baltic. In June 1943, at the end of his officer training, Brandt was promoted to Second Lieutenant and assigned to more detailed training in torpedoes in Flensburg, and then anti-aircraft weapons training in Swinemuende. In October of 1943, he was made first officer to a new boat being constructed in Bremen, U-869.

Throughout his training and service, Siegfried wrote home often. His letters home show a man of strong character and awareness far beyond his 22 years. Some are filled with concern for his brother Norbert, who in 1942 was drafted as an artillery man in the Edelweiss division and sent to German-occupied Norway. As a child Norbert was a bit slow academically and had been threatened with sterilization by the Zinten Nazi officials. Other letters show concern for the crewmen in his charge, often asking his family to put their hands together and pray for the end of the war. He would always ask his family to look after his sweetheart Dora Kuehne. On occasion, Siegfried was given leave and allowed to return home to Zinten to visit his family. His youngest brother Hans-Georg would eagerly await these visits and would ask, "Siggi did you bring me anything?" and then search his brothers pockets. After a suitable amount of teasing, Siggi would produce small toys and gifts from his hat. At night, Siegfried would go into the parlor with his father and talk, and young Hans-Georg would strain to catch bits and pieces of their adult conversation. The subject invariably turned to the prosecution of the naval war and how "Adolf knew more than his Admirals," and how even as an officer- he felt like "just a cog caught up in the machine". He often referred to the U-boat as a "Nazi Tauchboat," and told his father that he could count on everyman aboard the U-869, and that every crewman aboard was truly his comrade. On a darker note he told his father how he how he carried a small pistol with him, and that he would not wait for the end if things went wrong aboard the U-boat.

In the summer of 1944, Siegfried invited his family to visit him and the U-869 in nearby Pillau where it was undergoing training. His mother was not allowed aboard the U-boat and had to wait on the pier because Kptlt Neuerburg felt it was unlucky for a woman to step aboard the boat. Hans-Georg met Kptlt Neuerburg and had a tour of the boat, looking out of the periscope and climbing throughout the U-boat. The U-boat smelled of oil, and the collection of gauges and valves was overwhelming for the young boy. It was a great moment in his life. As Hans-Georg recalls Siegfried, "he was always the big brother, and I was so very proud of him".

In late October 1944, Siegfried Brandt returned home for just one day. He knew that the U- 869's maiden war patrol was to begin within the month, and that this might be his last visit home. He was entitled to a few more days leave but instead divided it between the married members of U-869's crew so they could spend a little more time with their families. On this last visit the family gathered in the parlor and prayed for the safe return for both sons. It was snowing heavily when Siegfried left home and headed back to the U-869.

Dora Kuehne and Hans-Georg Brandt were married in 1954 and had one son, Frank-Michael Brandt.