U-869 History and Specifications

The keel was laid on April 5th 1943 at the Deschimag AG Weser shipyard in Bremen, and the partially completed boat launched on October 5th 1943.

The boat underwent acceptance trails on January 17th 1944, and was then commissioned into the Kreigsmarine on January 26 1944 as U-869. After commissioning, the boat and crew underwent nearly a year of training at various bases in the Baltic in order to become battle ready. The U-869 log book entries (KTB) for this time period can be seen here.

The U-869 underwent multiple modifications to her original design as new technology became available. Frontline operational experience also provided new insight to the limitations and failings of some systems in the face of an ever-changing naval war. These alterations gave U-869 the best equipment and design modifications available in 1944 for the Type IX C class of U-boat.

Some of the major modifications and alterations that were completed during the yard overhaul in Stettin, from July 29 1944 until September 23 1944 were:

Other improvements and advanced equipment aboard U-869 included: 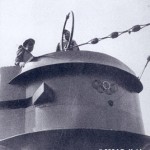 Like many of the late war U-boat crews, the men of U-869 came from all over Germany and consisted of mostly young new recruits, with a handful of experienced men. The average age was 20-years old with 17 year-old Otto Brizius being the youngest, and 34-year old Erich Tolke the oldest aboard. The officers and enlisted men of U-869 added their own personal touches to the U-boat as well. On the front of the conning tower was mounted the five circles of the Olympic Rings. The rings indicated that Kptlt. Neuerburg, commander of U-869, had been a graduate of the Naval Class of 1936, when the Olympic Games had been held in Berlin.

Although no other emblem graced the conning tower of the U-869, it is interesting to note that when the officers signed the guest books of both the Fourth and Fifth U Flottille's, they did so by drawing slightly differing versions of a logo and motto for the boat, as well as a coat of arms. I have been told that the crew had seen the Walt Disney film "Snow White" and felt the "Heigh-Ho" symbol over a "U" (or maybe horseshoe) fitting for the boat and its mission.

Next to the drawing in the Fourth's guest book is written the lyrics from a popular song by Swedish singer Zarah Leander, "I know a miracle will happen and a thousand dreams will come true". The identity or relevance of the coat of arms is unknown.

As in other U-boats, each of the forward torpedo tubes bore the name of a crewman's wife or sweetheart. Franz Nedels fiancé Gisela, Hans-Georg Rebers girlfriend Hannelore, and Willi Seefeldts wife Ellen each had their names painted on the tube doors. 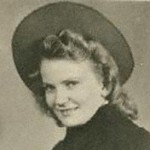 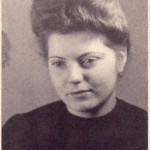 By late September 1944, all modifications and training had been completed and the boat was declared ready for battle. On 11/23/44 U-869 departed Kiel and arrived in Horten, Norway on the 27th. The boat spent a few days practicing schnorkel technique in the protected fjord, then departed on 12/3/44, arriving in Kristiansand the next day. After they took on fresh provisions and topped up the fuel bunkers, U-869 left on her maiden war patrol on December 12, 1944.